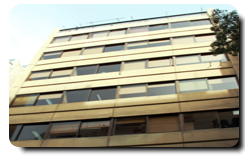 The Trifylleion Foundation of Kytherians is a charity non-profit making Foundation in the form of private legal entity situated in Athens and has as its objective the financing of public benefit activities and works in Kythera. The revenue of the Foundation, since its establishment in 1956 to the present, comes from rents of its real estate, donated by Kytherian benefactors and donors living in Greece and abroad. In addition, the Foundation has some income in cash donated by individuals.

The Foundation owes its name to the Kytherian instigator and great benefactor, the late Nikolaos Trifyllis. He   bequeathed his entire property for the creation of a charity Foundation with the purpose of building up and running a hospital in Potamos Kythera, which was indeed created. Later, in 1968, after the hospital passed over to the government (The Social Welfare Ministry), the objectives of the Foundation were broadened to include the establishment and operation of the Nursing Home for the Aged in Potamos Kythera, which was built with the generous donations of other Kytherians from abroad, with the purpose of residence and caring of aging Kytherians.